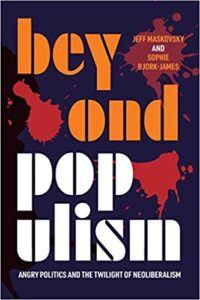 The American Studies Certificate Program invites you to join us on Thursday Oct. 15 at 4:30 p.m. for a panel discussion addressing issues raised in the newly released essay collection Beyond Populism: Angry Politics and the Twilight of Neoliberalism (West Virginia UP, 2020), edited by the Graduate Center’s Jeff Maskovsky (Anthropology) and Vanderbilt University’s Sophie Bjork-James.  The volume takes up global authoritarian populisms including Trumpism, Brexit, angry nationalisms of various stripes, worldwide mercenaries, antifascist resistance, varieties of necropolitics, and more.  Our panelists on October 5 will be Alyson Cole (Political Science, GC), Jeff Maskovsky, ​Frances Fox Piven (Political Science, GC), and Don Robotham (Anthropology, GC).  Please contact us at americanstudies@gc.cuny.edu for details on how to join this virtual panel discussion which will take place via Zoom.

This entry is licensed under a Creative Commons Attribution-NonCommercial-ShareAlike 4.0 International license.

THIS IS A CALL TO ACTION AREA

This is just an example shown for the theme preview. You can add text widgets here to put whatever you'd like.

Need help with the Commons? Visit our
help page Send us a message

Built with WordPress | Protected by Akismet | Powered by CUNY