Please circulate this call for papers: The Children of the People: Writings by and about CUNY Students on Race and Social Justice from the Autoethnographies of Public Education and Racial (In)Justice research group from the Center for the Humanities at the Graduate Center, CUNY, who is seeking writing from CUNY students, alumni, faculty or staff. Click here or see below for more information and to submit. The deadline has been extended to August 1st. 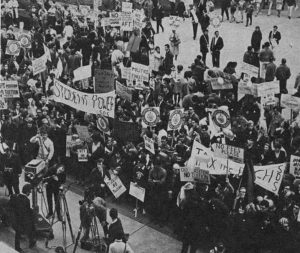 In 1849, Horace Webster, the first president of the Free Academy said of the radical social experiment that would become City College, and later, the City University of New York (CUNY): “The experiment is to be tried, whether the children of the people, the children of the whole people, can be educated, and whether an institution of the highest grade, can be controlled by the popular will, not by the privileged few, but the privileged many.” Since its opening as the Free Academy in 1847, CUNY has served working-class and immigrant New Yorkers by providing an affordable liberal arts education; in turn, its graduates—Nobel laureates, political leaders, artists, intellectuals, and everyday New Yorkers—have contributed to the vibrancy of the city and the nation.

New York’s experiment in free higher education for “the children of the people” was arguably one of the greatest democratic achievements in the United States. However, the opportunity at the start was not extended fairly to all, reserved primarily for the sons of white, European immigrants; befitting its public nature, it would be a black and Puerto Rican student-led movement in the 1960s that would take direct action to radically expand access to minority students. Since the 1970s, public support for CUNY has eroded under a neoliberal agenda seeking to gut the social safety net and to corporatize and privatize public services. As tax dollars began to be diverted from public goods, such as schools, affordable housing, community mental health centers, and social service agencies, to the military-industrial-complex, the prison-industrial-complex and other corporate interests, CUNY became one of the innumerable casualties in the assault on public life.

This systematic shift of funds from public to private is the largely unacknowledged substrate of the media portrayals of CUNY’s crumbling facilities, corrupt administrators and underachieving students. We contend, however, that despite massive divestment from public education, CUNY continues to be a space of radical possibility for teaching and learning. More than 170 years after the founding of the Free Academy, we revisit Horace Webster’s statement to question the outcome of the experiment from the perspective of the students. Who are the children of the people today?  In New York City of 2018, in what ways does CUNY still represent “the whole people” that Webster envisioned – the poor, working class, and immigrants?  What are the current voices of CUNY and what do they have to say?

This collection of writings is a project of the Autoethnographies of Public Education and Racial (In)Justice research group of the Center for Humanities Mellon Seminar in Public Engagement and Collaborative Research, and it is our intention to publish it as a book. It will feature the scholarly, creative and autoethnographic works of current and past CUNY students, as well as other members of the CUNY community, to highlight the richness and diversity of the nation’s first public university. We hope to feature voices that are typically muted in public debates about higher education.

Who Is Eligible to Submit: Writings from CUNY students and alumni will have priority, although we will also consider submissions from faculty, contingent faculty and staff.

To Submit: Please fill out this application form to apply.

About the Seminar:
Autoethnographies of Public Education and Racial (In)Justice generates narratives of current and past CUNY students to highlight the richness and diversity of the nation’s first public university.  This research team is organized around questions of how racial injustice shapes students’ lives before and after they arrive at CUNY and how their experiences here help them to navigate and help change an unequal society. Through a range of projects, this initiative looks at the ways in which CUNY students’ multitudinous experiences as immigrants, people of color, working class, LGBTQ, and/or formerly incarcerated people have shaped their struggles, aspirations and community interactions.

Sponsored by Autoethnographies of Public Education and Racial (In)Justice research team as part of the Mellon Seminar on Public Engagement and Collaborative Research from the Center for the Humanities at the Graduate Center, CUNY.

The Center for the Humanities
The Graduate Center, CUNY
centerforthehumanities.org

THIS IS A CALL TO ACTION AREA

This is just an example shown for the theme preview. You can add text widgets here to put whatever you'd like.

Need help with the Commons? Visit our
help page Send us a message
Skip to toolbar

Built with WordPress | Protected by Akismet | Powered by CUNY